MUMBAI: Brookfield Asset Management, one of the most influential infrastructure and real estate investors globally, is in advanced talks to buy into the troubled Hotel Leelaventure, said people directly aware of the matter.

Canadian investor Brookfield’s discussions are centered around assuming the debt held by JM Financial Asset Reconstruction Company. The marquee Indian hotel chain runs nine luxury properties, of which they own five, and has been grappling with high debt, pricing pressure and increased competition from global hospitality brands. JM holds a 26% stake and controls 96% of the restructured debt estimated at Rs 3,600 crore.

The promoter Nair family owns 47%, though most of it has been pledged, according to Hotel Leelaventure’s stock exchange filings. The deal with Brookfield would materialise if there’s an agreement on the promoters’ continued economic interest and management role in the hotel chain, the people said. The promoters are also working on other investor options, if there’s no alignment between Brookfield on their interests. 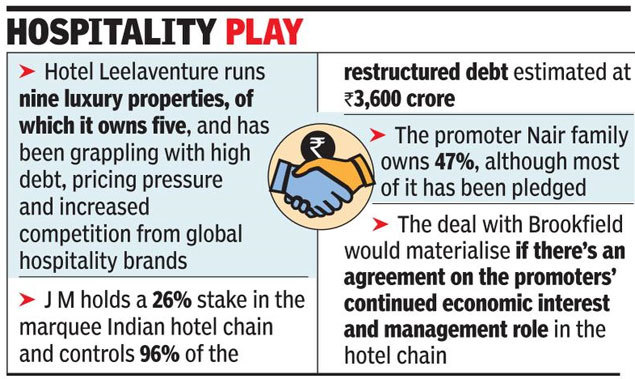 The other prominent transactions of Brookfield, which manages assets worth $200 billion worldwide, include acquisition of Reliance Communication’s telecom tower assets, buyout of real estate developer Unitech’s commercial office buildings and a portfolio of tollways from Gammon. When contacted, spokespersons for Brookfield, Hotel Leelaventure and JM Financial declined to comment.

The negotiations with Brookfield come even as the hospitality company passed an enabling resolution in June this year allowing JM to convert more debt into equity, which would give the asset reconstruction firm a larger ownership stake.

Mumbai Mirror: New builder must take on all liabilities of old project.