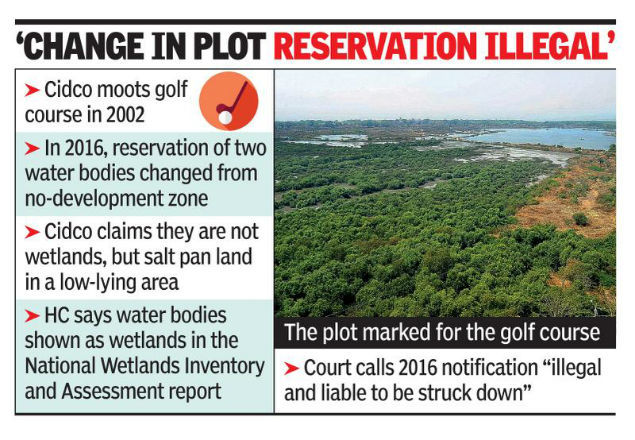 MUMBAI: The Bombay high court on Thursday scrapped plans for an 18-hole golf course and a residential colony with 17 towers on a large water body surrounded by mangroves near NRI Seawoods Complex in Nerul off Palm Beach Road in Navi Mumbai.
A division bench of Justice Abhay Oka and Justice Riyaz Chagla struck down a Maharashtra government notification that removed the two pockets of land measuring around 21 hectares from the no-development zone for facilitating construction of the golf course and residential complex. Importantly, the bench directed Cidco, Navi Mumbai Municipal Corporation and the state government to protect and preserve mangroves, wetlands and lakes in the satellite city.

Any destruction of water bodies and mangroves will lead to violation of the fundamental right under Article 21 of the Constitution of living a dignified and meaningful life, the bench added.

Among the water bodies to be protected are two lakes mentioned in the public interest litigations on which the orders were given: a 30-acre lake behind Delhi Public School, Nerul, and another behind Indian Maritime University on Palm Beach Road.

One PIL was by Navi Mumbai Environment Preservation Society in 2013 for protection of lakes, wetlands and mangroves, and the second by local resident Sunil Agarwal challenging the golf course and the residential complex, showcased as one of the ‘Advantage Maharashtra’ projects. TOI had first reported about the plan in September 2018.

Cidco had initially mooted plans for a golf course in 2002. In 2016, the state changed the reservation in the development plan for the two water bodies from no-development zone to regional park and residential zone. The project was awarded to Mistri Constructions. Cidco claimed the water bodies were not wetlands but salt pan land in a low-lying area. It also relied on a report by Bombay Natural History Society (BNHS) claiming the project was necessary to prevent possible bird hits at the nearby Navi Mumbai international airport.

The HC rejected both contentions and said the water bodies were wetlands shown in the National Wetlands Inventory and Assesment (NWIA) report and therefore “protected.” “These water bodies form (an) essential and important part of our ecosystem which cannot be eroded for providing for commercial or other uses…There is no material placed on record in the form of an opinion of experts to show that for preventing possible bird hits, the golf course is the only viable solution,” the judges said.

The court referred to the agenda note in the proposal to make changes to the development plan. “The agenda note will show that the decision of proposing change of development plan was taken mainly for commercial reasons. There is no greater public interest reflected from the agenda note for converting the water bodies in No Development Zone into a golf course and a residential complex. There is no affidavit filed to show that golf course is necessary for public good,” the bench said. The 2016 notification, the court said, was therefore “illegal and liable to be struck down.”

The court held it was the obligation of Cidco, NMMC and the state to preserve and protect all lakes in Navi Mumbai. Further, its September 2018 orders will apply in Navi Mumbai. These relate to treating mangroves as protected forests and preventing their destruction, including by hacking or dumping of garbage and debris on mangrove lands or in the buffer zone.

The Asian Age: Grants relief to buyers in project with OC.