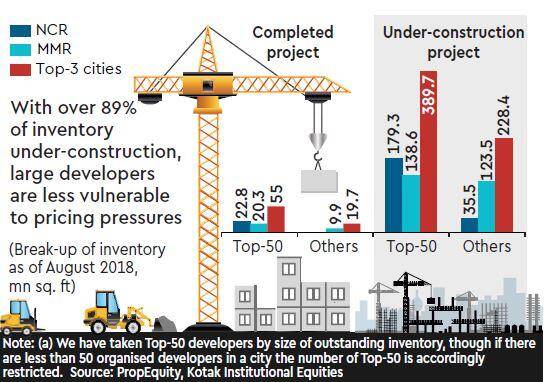 Builders are keeping their fingers crossed since 2018 is the first year after two years of disruptions — demonetisation and RERA and GST.

Big-bang launches and large scale bookings, symbolic of the festive season, are a thing of the past.

For the sixth year in a row home buying could turn out to be a low-key affair this festive season even though developers are trying every trick to woo consumers. There is some interest but whether the prices, freebies and discounts are enough to convert the queries into transactions is hard to tell. The smaller number of unit launches and the high inventories — much of it incomplete — suggests the sentiment is subdued.

Indeed, big-bang launches and large scale bookings, symbolic of the festive season, are a thing of the past. Arvind Nandan, ED (research), Knight Frank India, told FE the momentum, this time, is marginal. “The launches have been better but while demand was expected to pick up in the festive season, that has not materialised meaningfully as yet,” Nandan said.

But builders are keeping their fingers crossed since 2018 is the first year after two years of disruptions — demonetisation and RERA and GST. The management at Sobha believes that the transitional challenges may be behind us and that demand is picking up across all regions and segments.

However, estimates suggest that a total of over 618 million sq ft of under-construction inventory is available with the developers in top three cities. The amount of completed inventory is in the range of 75 million sq ft, according to analysts at Kotak Institutional Equities. “We highlight that at current levels of sales, the extant inventory will take as much as 50 months to absorb. However, if incremental sales are directed towards completed inventory alone, then the current inventory can be absorbed within 5-6 months,” they said.

Nonetheless, there is some underlying demand as seen in the number of enquiries. Nandan pointed out enquiries have been up about 10-15% compared to last year. “These are very subtle enquiries, like people just checking the going rates but not asking for much more,” he said. Mayur Shah, MD, Marathon Group, believes the sentiment is more positive than it was last year. “There is a better response from home buyers who are curious about the pricing and offers.” Shah said.

How many of these enquiries will convert into sales is not clear. Builders are doing their best, offering a nominal down payment on purchase, flexi payment schemes, a GST waiver, no EMI till possession, flat discounts on rates, free amenities & parking, white goods additions, or even winning schemes for expensive items like high-end mobile phones.

Among the launches, Bengaluru-based Sobha Developers is out with SOBHA Meadows in Mysuru and SOBHA Lake Gardens in Bengaluru that offer apartments with one to three bedrooms.

Mumbai-based Omkar Realtors recently introduced limited edition inventory of The Bliss collection at its existing project called Omkar Altamonte in the western-suburbs of Mumbai. It also launched Omkar Lawns & Beyond and Omkar Sereno both on Western Express highway in the city. Another Mumbai-based developer Marathon Realty recently is offering compact homes at price points of Rs 43 lakh and Rs 64 lakh in the eastern suburbs of the city. The launches, industry consultants say, will be in the Rs 60-80 lakh range, and mostly concentrated in Bengaluru, Hyderabad and in some northern India markets.

The Hindu: SRA project: blacklisted builder’s kin back in fray.

Builder asked to pay 5% of money paid for delayed possession.